As I mentioned yesterday, there have been a lot of ups and downs in the apartment search since I last wrote. I looked at many more places; I found–and lost–the perfect apartment; I retracted an application after discovering the thorough sketchiness of the local businesses; I put down an application for a good place. I’ll find out tomorrow if I get that one.

After some thinking and looking, I decided against living with someone else. (I hope they have found takers, because I haven’t told them yet!) I’ve just been on my own too long to re-accommodate myself to anyone who’s not family (Erik and Jackie are family). Yes, that’s a spoiled view to take, and I know how fortunate I am to have the luxury of thinking that way. Living with Kelly might have been great, I really can’t say. I didn’t talk to her enough, and that’s my fault for not thinking it through beforehand and realizing that seated, leisurely conversation is necessary before I consider living with someone. Also, though, undergrad life is not like graduate life, and that might have been a problem. Living with Lisa would have been mutually beneficial in that respect since she is also a first-year graduate student, but there was something different I didn’t like: her parents own the condo, so they would be my landlords. The inherent inequality in that makes me wary.

On Thursday, prompted by remarks from Jen, an old friend and UCLA student, and Kerwin, who spent ten years in LA, I decided to branch out and start looking for apartments a little farther from campus. My original reasoning had been that the closer to campus, the better and more convenient. Neither Jen nor Kerwin told me specifically that I shouldn’t look in Westwood, but both suggested I look elsewhere in a way that made me wonder if maybe I wasn’t going about this the right way. I realized that if I were approached by a new student seeking housing in Berkeley, I too would tell that person not to settle too quickly for a place near campus. I agree that being close by has some merit for one’s first year, but there are so many better places farther away, and more interesting neighborhoods, that there is no reason at all to confine oneself to the area immediately around Bancroft and Telegraph. I figured UCLA/Westwood is probably a similar situation, so I headed east of campus to see what there was to be had.

The first place I looked that was not close to campus was perfect, or so nearly so that I still feel an idiot for having lost it. It was a large studio in a converted house in an adorable, quiet residential neighborhood with lots of parking, within walking distance of LACMA.

There were two doors to the unit, which gave it a sort of houselike feel, and it had new Berber carpet (nubbly for the feets and good-looking), a large bathroom sink/counter area, and air conditioning. The rent was and is still the lowest I’ve found, and included electricity. And the manager was very nice. Unbelieveable. The only problem was that there was no kitchen. You gasp and wonder how I could survive without one. There was a shared kitchen with oven, sink, and portable burners, and since the building only had five units, crowding probably wouldn’t have been a problem. The unit itself included a small fridge, microwave and toaster oven. And, like a fool, I thought one day would make no difference, so I took the application home. That night I started planning my furniture layout and decided I would get a membership to LACMA. When I called the next morning, the apartment had already been taken by someone else-an obviously intelligent guy with the presence of mind to fill out the application on the spot. That was a bitter and frustrating day. It has taken me these few days, many hours of driving and looking at other places, to get over losing that apartment. I still don’t think I will find another place as pretty, as cheap, and with as much cheap parking. But I learned my lesson. I put the completed application into my bag and brought it around with me to all my other searches.

There is one really good thing that came out of finding that apartment: I discovered the Miracle Mile. The Miracle Mile area is pretty, safe and quiet, good for walking, and close to everything: LACMA, the La Brea Tar Pits, the Farmers Market and the Grove, Hollywood, and Melrose. I started centering my search around that area.

To my amusement and slight annoyance, the apartments I looked at on the Miracle Mile all closely resemble one another-and Erik’s, Dana’s, and my Berkeley apartments. I loved these apartments but I’d wanted to try something new. Oh well. I called lots of people and looked at several places, and decided to apply for one of them. It looks like a cross between Erik’s apartment and Dana’s, only with carpet and a ceiling fan. It’s not nearly as nice as the apartment I didn’t get, and parking will be harder to find, but some things make up for it. For one, the kitchen: there is one. Also, there’s laundry in the building, which there wasn’t at the other one, and this neighborhood is slightly more interesting-it’s closer to all that cool stuff like the Farmers Market, and closer to businesses. I walked a block away and found a sandwich shop and bakery. I have to call the management company tomorrow to see if I got it. Wish me luck.

Even though I applied for the Miracle Mile apartment, I still wanted to look at a few more today. The first one I went to–omg–the sketchiest place ever. EVAR, as they say. The inside was the cutest place I’ve seen, so I actually filled out the application and gave the guy a $20 to cover application fee. Then I walked outside to explore the neighborhood. First of all, in my defense, let me say that it is not a rundown neighborhood by any means. It is not old and ugly and crappy, and there isn’t a lot of foot traffic. It’s quiet. When I was driving through, I was looking for the street and I didn’t notice that there was anything weird about that stretch of Santa Monica Boulevard. But once I got out there, I saw: one sex shop (the Pleasure Chest!), two pawnshops, one liquor store, and one storefront (a darkened door) with a name in only Russian, club-type music blaring, and scantily clad girls clustered together outside. All this within a block and a half, in the daytime, within walking distance of a Whole Foods! Even so, I considered it. My poor mommy will likely be horrified, but there it is. Like I said, the place itself was adorable, and the guy told me that the presence of the Pleasure Chest makes sure the police check up on the neighborhood regularly. That may be true, and in fact I still think it’s not an unsafe area, but I just couldn’t face having my family visit me there! And pay for me to live there! I called Shra to get a second opinion, but I knew what she would say. Shra’s more conventional than I am, really. So I went back to the guy and asked for my application back. I was prepared to let him have the $20 if he wanted it-after all I’d been so interested not five minutes ago–but he was understanding and handed them both back right away. The place will have plenty of takers, anyway. 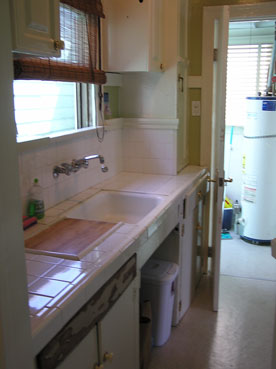 Cute bathroom, bigger than those of all other apartments I’ve looked at, with good storage space and a really wonderful claw-footed bathtub. 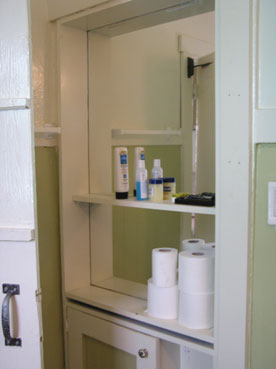 Dining area (bigger than it looks at this angle). 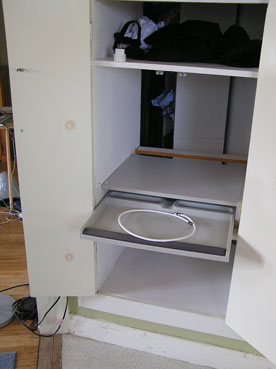 And, perhaps best of all, a fabulous carpenter-made Murphy (foldout) queen-size bed and cabinets!

In other news: I have been doing some gastronomic explorations. Jason and Albert came to visit me, and we went to the famous Versailles and had excellent excellent Cuban food. And today I met up with Audrey, friend from kindergarten for heaven’s sake, and we went to the Farmers Market, where I was completely bowled over by the size and scope of the food. It’s not a conventional farmers market–it’s like a giant exciting food court (and market). You could probably eat there every day for a year and never have the same thing twice. Amazing. And I’ll be within walking distance of it if I get the Miracle Mile apartment! I’ll post my pictures of that apartment soon. I think we’ve had enough photos for the day!